Stockings are among those pieces of clothing that elude research: They were rarely written about and there are few extant ones on display in museums. Men's are seen often in pictures, but one can't deduce much from them.

Apart from the familiar knitted stockings, there were also those made of woven fabric, felt or leather. Knitting and related techniques had been known for centuries, but it seems that woven (i.e. non-elastic material) seems to have been preferred at first. That's a bit strange since the elastic qualities of knit make it so very suitable for smooth-fitting stockings. A possible explanation is that it was easier and cheaper to weave thin fabric than to knit similarly thin material. The kind of sock that grandma used to knit simply weren't fine enough for fashion, while stockings knitted finely enough were awfully expensive because of the awful lot of work that went into them - while they probably didn't last much longer than the nylons today, considering the period washing techniques.

Relatively early - I don't have the source that mentions the year handy - a knitting machine was invented. It must have been in the early 18th century. Anyway, the machine made it possible to knit stockings much faster, with less manual labour, and therefore cheaper than before. This made knit stockings available to a wider range of consumers, so that stockings knit of cotton or silk became more common.

A stocking made out of a non-elastic or only slightly elastic material can, of course, not be made without seams as is the case with modern socks. So the stocking was made of two pieces: The larger one forms the shaft, heel and upper paret of the foot, the smaller one the sole. The sketch on the right (click to enlarge) gives you an idea of how the parts are shaped. The dotted line shows where the seam runs: Down the centre back of the leg and under the heel. For a better fit, a wedge (known as clock) was inserted where the slits are drawn into the larger part, going up well above the ankle. The clocks were often of a different colour from the rest of the stocking and decorated with embroidery.

Either round-knitting was not invented yet, or it wasn't used - at any rate, knit stockings were made in the same way as woven ones, i.e. one (flat) large part and one smaller part, possibly with a decorative knit pattern where the clock would sit. It was not necessary to make a clock, but it was simulated, probably because it was so elegant. The seam at the back of the leg was even simulated in the 19th century, when stockings were mechanically round-knit. Even today, one can buy nylons with a (phoney) seam. It's a big advantage for those of us who can't knit: We can sew period stockings out of T-shirt knit.

If possible, have your measurements taken by someone else while you stand upright. The important measurements are

Where the stocking is supposed to end is a matter of taste, but in any case it should be well above the knee. Before c. 1750, one often sees how men pull the stoccking over the hem of the breeches and fold them back down again, so I deduce that the stocking ended two hands above the knee. 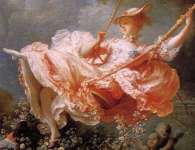 Take a large piece of paper and draw onto it a straight line which shall be the length of the stocking. Make a big marking near one end - that's where the heel meets the ground. For each point where you've measured the leg circumference, mark the distance from the ground at which it was taken on the longer leg of the line. Draw a line through each of these points at right angles to the base line. On those cross lines, mark off half of the measured leg circumference on either side. Mark the overall length of the foot from the "big marking" towards the shorter end of the base line. From the tip of the foot you have now marked, measure back towards the "big marking" the length of the upper foot, i.e. from the toes to the point where it becomes the leg. That point will be the end of the back seam underneath the heel. Connect the points you've drawn onto the right-angle lines with a smoothed line which runs vertically from ankle to heel, then curves inward to meet the last marking you've made. That line is the same as the dotted one in the above sketch.

As for the foot part, you've already measured off the length. Draw another line at right angles and mark 1/4 of the circumference of the foot, once where the heel meets the sole and once at the base of the toes. Connect the dots again, rounding the foot part off around the toes. The sole is the same shape as the foot part.

If the stocking is made of woven fabric, cut it on the bias so that you get at least a hint of elasticity. Make sure that the footgoes throught the narrowest part at the ankle. If not, you'll have to either make the ankle wider or add lacing in the ankle area. In the case of knitware, the stocking must be made narrower than the measurements - by how much depends on the kind of knit. Check by how many precents the knit gives, and subtract that percentage from the width. Remember that any widthwise pull will shorten the legth of the stocking, so you may have to make the stocking longer to make up for it.

Sewing up the stockings should not require any explanations. As for wearing them: Of course stockings will tend to slide down, no matter what they're made of. That's why they have to be kept in place by garters. They can consist of a band of woven material that is tied into a bow, or a strip of leather with a small buckle. In either case, it is tied around the narrowest part of the leg, just below the knee. Some contemporary pictures suggest tieing it above the knee, but that would be impossible unless the thigh was smaller than the knee, which is extremely rare.