Fans of the 18th Century

(Some pics can be enlarged by clicking them.)

Fans as such are among the accessories for a period impression that are relatively easy to get by. Authentic fans, however, are quite a problem. Originals are awfully expensive and way too precious to use. Let's study the features of 18th century fans in order to learn what suitable substitutes must look like - or not look like.

While fans of the 19th century and later typically form a half circle when opened, most 18th century fans only form a 1/3rd or 3/8th circle. Only during a short period around 1750, half-circle fans were a bit more frequent, often with quite ornately painted and carved sticks. The sticks are about 28-30 cm long, rarely shorter (25-26 cm) or longer (up to 32 cm). The lower end of the closed fan, seen from above, is usually rounded (see further down).

The sticks were made of wood, mother of pearl, tortoiseshell or ivory. In the early to mid 18th century, the lower part of the sticks formed a solid surface that could be pierced, carved and/or painted. In the late 18th century, there was "daylight" between the sticks. The sides of the sticks were usually carved, especially near the lower end. Sometimes the carvings are made in such a way that patterns or figures become visble only when the fan is closed.

The rivet that holds the fan together is often set with a rhinestone or gem. U-shaped brackets (for attaching the fan to a châtelaine) date to after 1800; tassels attached to such a bracket appear even later.

There are folding fans and brisé fans. Brisé fans consist only of sticks that get continuously wider from the rivet to the top, forming one solid surface. They are held together by a fabric band. The sticks of folding fans become narrow at one point and a leaf is stuck to one or both sides of the narrow part.

Brisé fans were relatively common until about 1730, then practically nonexistent until 1800/1810. The early brisé fans have smooth sticks without any carving or piercing, painted across the whole surface. There usually is a break between the lower and upper part that seems to emulate the border between stick and leaf as seen on folding fans. The band that holds the stiks together is folded around the top end of the sticks. Post-1800 brisé fans are typically pierced down their whole length, which is only about 15 cm, and the band is strung through oblong holes near the top.

The leaves of folding fans were made of paper, parchment or "swan skin", which actually as the very fine leather of lambs or kids. The Frauenzimmer-Lexicon of 1715 mentions silk leaves, but the only extant example of a fabric leaf i know of (in the silk museum of Lyon) is dated to 1770-80. Either silks leaves were very rare or they disintegrated early on - probably both. Fan leaves made of fabric only came into fashion very late in the century. Lace and feather fans are phenomena of the late 19th and early 20th century.

For the most part of the century, there are only depictions of persons and landscapes. Watteau scenes were popular long after the death of the painter, along with ancient Greek myths, shepherd scenes, chinoiseries, parks, ruins, harbour scenes. Often the scenery is surrounded by flowers and rocailles or enclosed in medallions as seen in pics 3 and 4. The sticks are decorated likewise - if at all -, but with carving, piercing and inlays added.
From about 1780 on, the hand-painted leaves are joined by printed ones; idyllic and mythical scenes complemented by depictions of current events such as the Montgolfière and by classicist ornaments. The latter are not only found painted or printed, but also made of spangles embroidered or stuck onto a gauze leaf.

All these fans are lamentably unauthentic - some more so, some less. The debutante fans you can safely forget about due to the high plastic content and lace. The Spanish ones would be OK if the leaf was a bit wider and the decoration not as 19th-centuryish. The Chinese brisé fans are suitable for Empire if the nylon threads are replaced, but not for anything earlier. Asian folding fans are the most suitable - the exotic appearance can easily explained by the chinoiserie fashion of the time. The main problem is that 18th century fans usually were larger than either Spanish or Asian modern fans.

Here's a comparison of shapes and sizes between a modern Japanese fan (brwon/blue, the smallest), a Spanish fan of the 60s (black), and an original 18th century fan (ivory/MoP, the largest). Note that neither the Japanese nor the Spanish fan have the U-shaped bracket that has been so popular since the 19th century. Its absence is one of the main features that make them more or less suitable substitutes, apart from the natural materials. 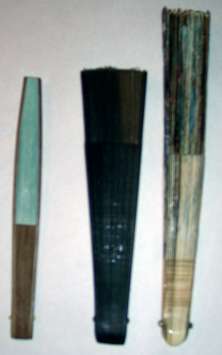 If you place great stock in authenticity, I'm afraid that you will have to have one made or make one yourself. The fan museums in Paris (see museums) or London should be able to help you there. The London fan museum even offers classes. Malcolm Cox (see purveyors) can supply the sticks.

The Language of the Fan

When researching 18th century fans, you may have come across websites or printed material that mention a "laguage of the fan". From the 18th century on, they claim, fans were used to send secret non-verbal messges across a crowded room. Some "sources" quote veritable dictionaries which pair a certain fan gesture with a certain meaning, e.g. "holding the closed fan to the left cheek" = "I'll meet you later". Those "sources" almost never mention their sources, and if they do, they're usually not from the 18th century.

I have always doubted such assertions, simply because they were illogical: If the fan language really was secret, how did both the sender and recipient of the message know what was being said? If knowledge of the language was taught in classes or books, how could it be secret?

However, the legend is so widely spread that I felt compelled to research its origins. I've created an extra page for that.