What about Lederhosen and Dirndl?

Did you find these pages while trying to research Bavarian folk costume? And you expected to find Dirndls and Lederhosen? 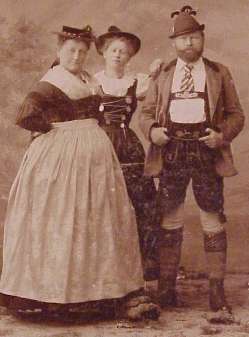 I'm sorry, you won't find them here. The definition of Tracht (traditional costume) I use is very different from what you find in the media, tourism PR or at the Oktoberfest. To me, it is a regional variant of a historical fashion style. There is no one national or regional costume either because it changed over time, just like the usual fashion did. The clothing of a citizen of Munich looked very different in 1750 than it did in 1850, for instance. People in Munich dressed differently from those in Dachau.

The terms "Dirndl" and "Lederhosen" (often wrongly spelled 'Leiderhosen' or 'Liederhosen' in English context) are closely connected to a wrong, cliché-laden image of Bavaria. To use a universally known comparison: It's like cowboy hats for Americans (all of them) and bowler hats for Brits.

For the past 15 years or so, German newspapers have, around Oktoberfest time, participated in the construction of a certain image of so-called Bavarian costume. The journalists involved are either bought by tourist agencies or they have no idea at all...probably both. Unfortunately, both young locals and tourists now believe in the construction. Oktoberfest has become an occasion for costuming just like carnival or halloween - and every bit as gruesome as the latter.

What we nowadays call Dirndl, i.e. a dress consisting of a figure-hugging bodice, an attached wide skirt and an apron, is an invention of the modern fashion industry. The oldest picture I have found so far is in a fashion (!) magazine dated 1917 (picture on the left1). At that time, regional historical styles had already died out decades ago. According to othere people's research2, the Dirndl came into existence as countryside dress-up for rich tourists who spent the summers in the foothills of the Alps. They wanted to dress like Heidi, or Zenzi, or what they thought Heidi and Zenzi dressed like. And sometimes the whole family had their picture taken in dress-up (picture on the right).

Women in the 19th century did wear dresses vaguely resembling the Dirndl, but only vaguely. Take any dress of, say, the 1840s to 1890s, even one worn in England, subtract any fashionable trim and anything that would obstruct physical work (such as mutton-leg sleeves, tiny waists, drapery, skirt supports), add an apron, and you get something like a Dirndl. Actually I believe that the everyday dress of the late 19th century farmwoman may have been the ancestress of the Dirndl in that someone created the Dirndl to look vaguely like it, in the same way that Outlander costumes look vaguely like 18th century clothing. However, a 19th century farmwoman didn't have her tits out. Neither did the fashionable 1917 Dirndl wearer. That came later, much later.

And what about Lederhosen? Well, they really were worn. Just not necessarily the way you imagine them. Leather breeches were, in the 18th century, worn throughout Europe by riders and hunters. A mid-18th-century French book (Garsault) even has instructions for making them. They were not much different from the fabric culottes of the era. Regional costumes throughout Germany and Europe have fossilized them. The not-quite-knee-length leather breeches known from Alpine costume may actually be unique for a certain region up in the mointains3, but the Alps comprise only a tiny part of Bavaria, and Bavaria hosts only a tiny part of the Alps.

Anyway, in my view neither Dirndls nor Lederhosen count as Tracht (i.e. historical clothing) the way I use the term. They are traditional, of sorts, but that tradition was a deliberately invented one that is 150 years old at best. Since I don't want to add to existing clichés, no more of it!